Interface Inventor® with COMSOL Multiphysics® via LiveLink™ for Inventor® 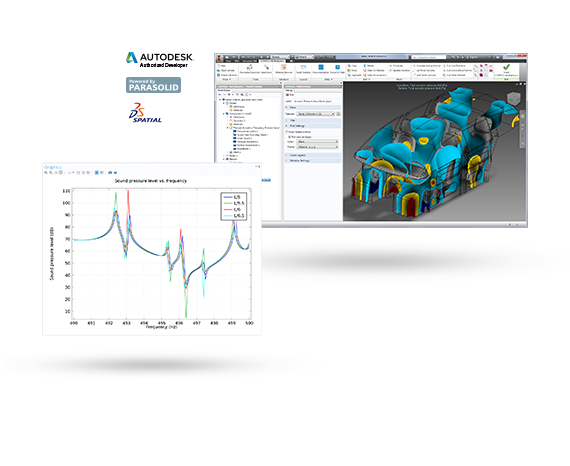 This model simulates the acoustics inside a sedan and includes sound sources at typical loudspeaker locations. Results show the total acoustic pressure field and the frequency response at points inside the cabin.

Perform COMSOL Multiphysics® Simulations from within the Autodesk® Inventor® Environment

LiveLink™ for Inventor® allows you to combine your COMSOL Multiphysics® analysis with a leading CAD software for 3D mechanical design – Autodesk® Inventor®. It allows you to integrate it with the capabilities of COMSOL Multiphysics from within the Inventor® modeling environment, and utilize its power for geometry design. Using LiveLink™ for Inventor®, you can integrate simulation with your design workflow. It includes features for repairing and defeaturing your geometries prior to simulation, making changes to your designs during the simulation process, and optimizing your designs through automated parametric sweeps or optimization studies.

COMSOL Multiphysics and LiveLink™ for Inventor® enable you to understand how a process or physical phenomenon operates in the environment for which your designs are targeted, and to simulate how different physics interact with each other in your design. Since LiveLink™ for Inventor® includes the COMSOL Desktop® as an embedded tool within the Inventor graphical user interface (GUI), switching between the two environments is seamless. Known as the One Window interface, this environment contains the Model Builder, Settings Windows, and tools, icons, and menu items that you are familiar with when modeling in COMSOL Multiphysics. It also allows you to investigate your results using Inventor's graphic tools and rendering.

LiveLink™ for Inventor® facilitates the direct synchronization of Inventor CAD models to COMSOL geometries in the COMSOL Desktop®. All you have to do is switch from the COMSOL Desktop® to the Inventor GUI, or if you are working in the One Window interface, exit the COMSOL environment, modify your CAD design using Inventor tools, and then switch back to the simulation environment. Changes in the design are automatically propagated so that you avoid the continual export and re-import of CAD models into COMSOL Multiphysics. Another feature that helps here is that associativity is maintained despite geometry changes. Physics definitions on model domains and boundary settings are remembered and reapplied once synchronization between the two geometries has been performed.

When working with the CAD model, parameters defined by Inventor, such as the length of an edge or position of a hole, can be interactively accessed by COMSOL Multiphysics. This means that you can run simulation analyses that involve parametric sweeps and geometric optimizations as part of your simulation workflow.

Built on the functionality found within the CAD Import Module, Inventor CAD files imported through LiveLink™ for Inventor® are converted to Parasolid® geometries. When you are not working within the One Window interface, these geometries can be manipulated by COMSOL Multiphysics, such as by specifying an encompassing volume around a CAD design to function as a domain for performing simulations. In general, however, you will want to use the power of Inventor for changing geometric parameters while working with your simulations, and leverage the convenience of the One Window interface.

While LiveLink™ for Inventor® allows you to import CAD files in the Inventor format (.ipt and .iam), it can also import files in the STEP, IGES, ACIS®, and Parasolid file formats. Another feature allows Inventor parts or assemblies to be automatically saved as part of the COMSOL model. This helps extensively in associating the right CAD model with its respective simulations, and, by opening a specific COMSOL file from the Inventor environment, ensures that the associated CAD model is automatically loaded. This feature also allows you to create CAD and simulation model packages that you can easily share with your colleagues.

LiveLink™ for Inventor® comes with all the geometry manipulation tools found within the CAD Import Module. This includes the automatic detection and repair of geometric anomalies, and forming solids after healing gaps based on pre-defined tolerances. When deletion or removal is specified as part of the defeaturing or repair operation, healing is also done automatically by filling or patching the resulting geometry through either creating new faces, or morphing together the surrounding ones.

Defeaturing is also an important tool provided in LiveLink™ for Inventor® where important artifacts for the CAD model, such as fillets, may create dense meshes in a region of your simulation model that is not particularly relevant. Furthermore, the nature of CAD modeling can sometimes lead to small, insignificant features like small edges and faces, which also lead to areas of dense meshing and must thereby be defeatured. These can be automatically detected by LiveLink™ for Inventor® and either changed in the Inventor environment or defeatured through using removal and healing tools that come with LiveLink™ for Inventor®.

As an alternative to defeaturing, COMSOL Multiphysics provides the ability to perform virtual geometry operations. This complementing functionality provides easier and less computationally intensive simulations through instructing the COMSOL meshing tools to ignore a specific geometric feature, and mesh a virtual geometry. While defeaturing operations also remove such features, they can introduce slight changes into the surface curvature, which may create erroneous simulations in applications such as studying contact stresses. Virtual operations will hide these artifacts to reduce the need for computational resources, while still allowing the simulation mesh to be based on the original surface curvature.

Autodesk and Inventor are registered trademarks of Autodesk, Inc., and/or its subsidiaries and/or affiliates in the USA and/or other countries. All other trademarks are the property of their respective owners. For a list of such trademark owners, see http://www.comsol.com/tm. COMSOL AB and its subsidiaries and products are not affiliated with, endorsed by, sponsored by, or supported by these trademark owners.

Note that not all file formats are supported on all operative systems, for details see System Requirements

This model computes the fundamental eigenfrequency and eigenmode for a tuning fork that is synchronized from Inventor via the LiveLink interface. The length of the fork is then optimized so that the tuning fork sounds the note A, 440 Hz.

This model computes the fundamental eigenfrequency and eigenmode for a tuning fork that is synchronized from Inventor via the LiveLink interface. The length of the fork is then optimized so that the tuning fork sounds the note A, 440 Hz.

Every business and every simulation need is different. In order to fully evaluate whether or not the COMSOL Multiphysics® software will meet your requirements, you need to contact us. By talking to one of our sales representatives, you will get personalized recommendations and fully documented examples to help you get the most out of your evaluation and guide you to choose the best license option to suit your needs.

Just click on the "Contact COMSOL" button, fill in your contact details and any specific comments or questions, and submit. You will receive a response from a sales representative within one business day.