See examples of using the General Projection operator in your multiphysics models.

The General Projection operator integrates along curves defined via expressions. Most typically, it is used to integrate along one Cartesian direction. Examples of these integrations are presented here.

Consider a cubic domain, aligned with the global Cartesian coordinate system, within which a variable is defined. An isosurface of this variable is plotted in the image below, showing the volume within which it is less than zero. It is desired to take the integral of this volume along lines parallel to the x-, y-, and z directions and map the result onto the yz-, xz-, and xy-planes, respectively. 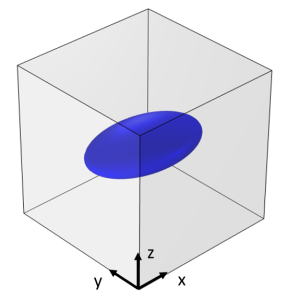 Isosurface of a field defined within a domain.

To take these three integrals, three different General Projection operators are used. The Source Map and Destination Map for each determine the direction of integration. The x- and y-expressions for the Destination Map are the plane that will be projected onto and should match the x- and y-expressions of the Source Map. The z-expression of the Source Map is the dimension being integrated over, the direction normal to the plane. An example is shown in the screenshot below. 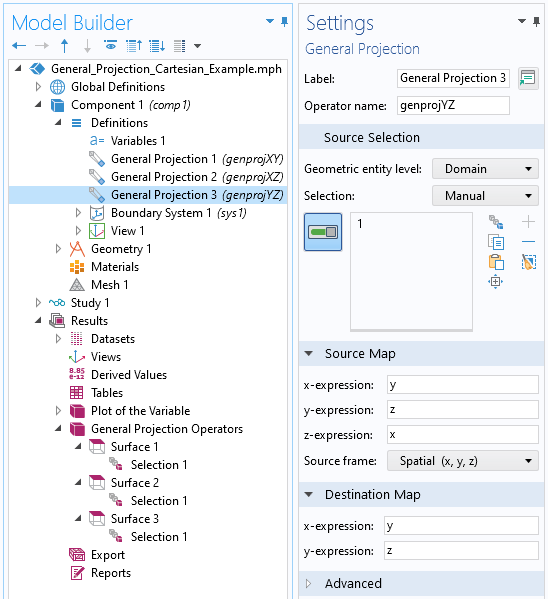 Screenshot showing the settings of the General Projection operator that integrates along the x-direction.

The results of this operator are available everywhere within the domain, although typically they are only plotted at one surface, as illustrated below. 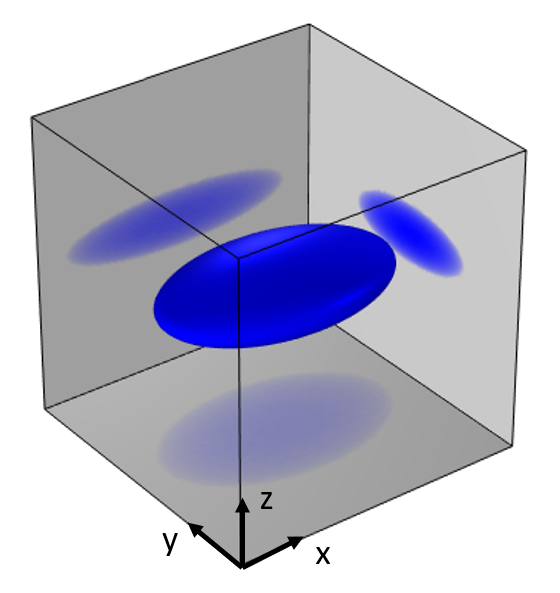 Results of the General Projection operators, integrating the volume of the isosurface along the three Cartesian axes.

The smoothness of these integrals is dependent upon the level of mesh refinement, but refining the mesh increases computational cost. If only integrating along a single direction, use a swept mesh in that direction if possible. This is particularly beneficial if this operator is used to introduce a coupling within a multiphysics model.

One operator can operate upon the result of another, making it possible to integrate over a plane and project the result onto an edge.

When plotting results of this operator, smoothness of the results can be improved via the Quality > Resolution setting within the Plot features.