You may not think of reheating food in the microwave as a drying process, but as we saw at the COMSOL Conference 2013 Boston, microwave technology — the same technology used in domestic microwave ovens — can be used for drying fruits and vegetables. One poster presented at the conference featured microwave drying of potatoes and how the heat and mass transfer that occurs can be modeled to predict the drying process.

Changes in Texture and Water Content During Microwave Drying

As anyone who has ever microwaved a marshmallow knows, microwaving can result in some textural changes to your food. At the recent COMSOL Conference in Boston, there was a presentation by students who had modeled the transfer of heat and mass that occurs when microwaving potatoes to examine the changes in water content and surface texture. A joint effort between Huacheng Zhu of Sichuan University (Chengdu, China) and Tushar Gulati and Ashim Datta of Cornell University resulted in a 3D COMSOL model to predict the effects of heating one cubic centimeter of potato. They modeled it as a porous material (as shown in the figure below), heated in a standard microwave oven set at 10% of its full power level.

Using an elaborate setup containing an optical fiber probe, a digital balance, and an infrared camera, they also took experimental measurements to gather data on the temperature of the potato mass at different points in the heating. They later compared this to the COMSOL simulation.

Since a potato is about 80% water, there is plenty of water to bump around, heat up the rest of the potato, and evaporate. Therefore, they had to keep a careful eye on the conservation of mass happening in their system. Zhu, Gulati, and Datta set up the COMSOL model to predict how the moisture content in the potato cube changed over time during the heating process. They examined the solid, liquid, and gas phases of the moisture in the potato. To calculate gas pressure, they used the Maxwell-Stefan Diffusion model for air and vapor, with Darcy’s law included.

They also studied the surface mass fraction of vapor (i.e., the proportion of the whole mass that is vapor, or the ratio of vapor mass to the rest of the potato mass). For 22 seconds of a microwave cycle, they found it to be pretty constant after the first few seconds, but it showed a sudden spike on several areas of the cube at just 2 seconds in.

Not surprisingly, the water saturation decreased notably over a period of just a few minutes, with the saturation lessening most quickly on the outside of the cube.

Surface mass fraction of vapor in the first heating cycle. Images by Huacheng Zhu, Tushar Gulati, and Ashim K. Datta,
and taken from their poster submission. 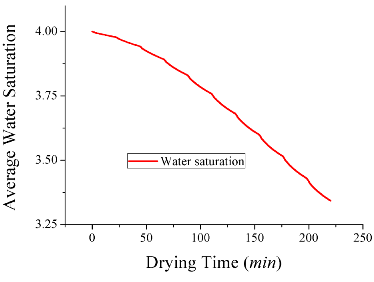 Image by Huacheng Zhu, Tushar Gulati, and Ashim K. Datta, and
taken from their poster submission.

The model created by Zhu, Gulati, and Datta is a helpful investigation of the drying process occurring in the potato as it spins in the microwave. Who knows? In the future, we may be able to predict exactly how long to microwave our meals to reach the optimum combination of heat and water saturation.

Performing a Multiphysics Analysis of a Thermal Microactuator